Every writer gets the standard set of questions, including the inevitable, “How long does it take you to write a book?” The answer varies, but a typical nonfiction book of about 100,000 words can require perhaps two years.

But there are exceptions.

Take the WW I novel Duel Over Douai. From inception to publication, oh, fourteen years.

A bit of background:

Two of my friends, colleagues, and unindicted co-conspirators are retired naval aviators, Commanders Robert R. “Boom” Powell and Jack D. Woodul. In 1997 we began exchanging tongue-in-cheek emails about three Great War pilots based upon ourselves. Boom was Leftenant Robert John Brabazon Woodul-Powell; Jack became wild and woolly frontiersman George Armstrong Cody; and my alter ego was Leutnant zur See Friedrich Prinz von Tillmann und Bethwig. The situation was complicated in that “WP” and von T were second cousins who had grown up together. When the book opens in 1917, von Tillmann is nineteen and Woodul-Powell one or two years older. Cody’s age is indeterminate but he’s mature enough to run from the law along the Mexican border. He fetches up in France, joining a Sopwith Camel squadron where he and WP take an immediate dislike to one another. Eventually their animus turns to grudging respect, then friendship.

By and by, we three amigos discovered that we had about 13,000 words of assorted passages and no plan what to do with them. All we knew was that we were having fun. But since Boom and Jack were still gainfully employed flying airliners all over the globe, our email literary society took a back seat. Not until they retired and Jack had built Rancho Del Mundo in the New Mexican fastness were we able to devote more attention to what had become Duel Over Douai.

A word about the title:

We’re big on alliteration, and kicked around other titles such as Passion Over Passchendale and Victory Over Vimy. But DOD just had a ring to it, so we kept it, though Douai only appears gratuitously, and is removed from most of the action up in Flanders.

Certain Great War conventions had to be observed, including Wine, Women, and Song (well, OK, especially Wine, Women and Song). The protagonists indulge in all the above, but particularly von Tillmann’s encounter with Ursula. In fact, a recent DOD reader asked “So…who’s Ursula?” I could only reply “Well, Ursula is Ursula.” (Those who have seen the 1966 epic The Blue Max certainly recall Her in The Towel Scene.)

The reader’s question reflected the variety of femmes in the novel, including one or more each British, German, and French. In fact, Lynn is named for a longtime friend from London environs. (Other friends’ surnames are employed throughout, with a disclaimer that any resemblance is coincidental yadda-yadda.) Moreover, we asked wives and lady friends to read segments of the text for a feminine perspective, and pretty much heard what we expected. Stephanie, an Air Force brat teaching medieval literature in Britain, replied, “Well done, but this is such a boys’ book…”

In our defense, we tried to inject something other than dogfights, drunken revels, and mayhem in the mix by attempting to place our characters in context of time and place. Much historical fiction simply plops down 20th-21st century characters in a period setting, but DOD seeks to depict young people in a chaotic period, experiencing the violent end of the ordered world they had known all their brief lives. We are told that we succeeded to a large degree.

As for the aviation and military material, we think we scored 10 out of 10. All three of us have extensive experience flying open-cockpit aircraft, and Boom continues logging hours in WW I machines such as Avros and Fokkers. The fact that Jack and Boom both are combat veterans only enhances the effect. But DOD’s authenticity extends beyond technical aspects—in some cases matching the date with the weather. It’s unlikely that any Great War flying tale has achieved a similar standard of authenticity.

The variety of aeroplanes should please almost everyone. We have Camels, Bristol Fighters, Curtiss flying boats, and Hansa-Brandenberg floatplanes, plus Albatros and Fokker fighters.

Without giving away too much of the plot, I’ll note that WP receives the Victoria Cross for a notable Gotha interception over London one night (Gothas are way cool) while von Tillmann earns the Pour le Merite, and Cody earns a rare reputation as an accomplished mankiller fueled by red meat and single-malt scotch.

The challenge and the fun of writing DOD was to portray ourselves as we might have been during World War I. All are thrust into positions of leadership or at least responsibility at tender ages. Tillmann is just twenty when the book ends, probably the only naval aviator in Great War fiction. He struggles with self doubt while his kinsman and the Yank try to deal with British bureaucracy, class consciousness, and the inevitable SOBs in every large organization.

DOD has been very well received. Here’s a couple of reader comments:

“…more than just a book for aviation buffs. It is an extraordinary story of young men at war, locked in merciless combat over the Western Front at a time when pilots did not have parachutes and the penalty for a mistake was death. Duel Over Douai is a must for anyone seeking an exciting book on a little-appreciated era of aviation history, and I eagerly await any sequel these three produce!”

“…the authors have such a natural understanding of mechanical stuff that they insert meaningful details into a sentence in a way that it sounds ‘right.’ You can feel it, you can smell it, you can hear it. Also, I've not read anything so devoid of fluff, mistakes, and exaggeration for a long time. Another of those books that you hate to see end.”

Incidentally, Boom has made a start on Volume II. Watch this space for updates!

DOD is available only as an e-book. You can order it off Amazon.com:

Posted by Barrett Tillman at 8:33 AM 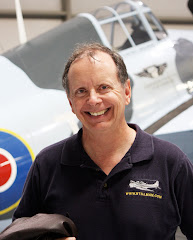